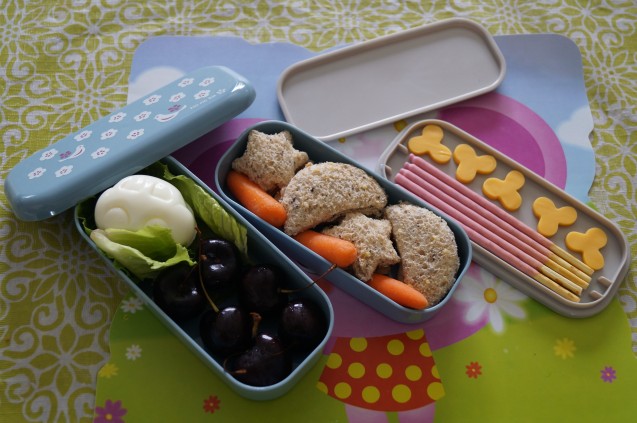 Yesterday was the first day of Grade 1 for Poppy, and for the past week I have been practising for her school lunches. A friend of mine had given me some Japanese Bento Box lunch supplies a couple of years ago, but I never really tried making Bento lunches in earnest until now. And now I’m not making them for me, but for my daughter. She tends to dawdle and get too excited and not finish her lunch, so I thought doing Bento lunches would help facilitate her finishing her lunch at school. This one was my first attempt for a Bento lunch at home, and it was just a very simple snacky lunch with star and moon-shaped peanut butter sandwiches, a car-shaped hard-boiled egg, cherries, carrots, cheese cut-outs, and Pocky sticks. Not much different from a regular lunch except it’s prettier! The arranging and artistic side of this style of lunch appeals to me and I am actually having a lot of fun with it rather than it being too much work. Though we’ll see how I feel about it by December.

I also found the most amazing book at the library called “501 Bento Box lunches”. I counted and I already have 97 post-its stuck in it, so I decided that was enough to warrant me buying myself my own copy, which I am now eagerly awaiting. I am also gleaning a lot of information from the website Just Bento which also has a weekly bento planner worksheet you can print out! 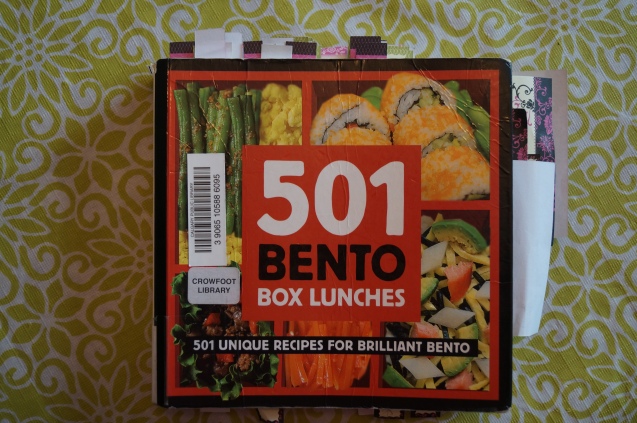 All of this just tickles me–pretty books, planning, post-its. Sometimes I wish I had a desk job just so I could have a desk full of pretty pens and post-its. But then I think that no, this is better, I’ll keep my pretty desk in my art studio and just do my own thing.

So then I moved on to making a more Japanese style Bento, and tried my hand at making Onigiri (formed rice balls that sometimes have filling). I am going to have to practise those a bit more before putting them in her school lunch. I made them with Tuna Soboro filling, and although she liked them and preferred the Nori (seaweed) wrapped ones, they were a bit too big. I will have to work on making smaller ones, and maybe also trying some different fillings. I am also learning how to get everything to fit into the Bento once the lid is on–the lid didn’t quite seal over the section with the Onigiri in it. This Bento had one wrapped and one unwrapped Tuna Onigiri, edamame, apple slices, dried fruit, and Pocky sticks.

So that brings me to the first day of school Bento Box. I did a more simple one with cantaloupe cut-outs, star and moon-shaped honey sandwiches, carrot sticks, fish-shaped hard-boiled egg (cut in half to fit in the bottom tier of the bento), and apple cut-outs. And then there was some extra stuff stuck in her lunch bag for snacks. I called it the Kissing Fish Bento :) Though it turns out that the first day of school was far too exciting–all she had eaten when I picked her up at the end of the day was the bottom tier with the egg and the apple; but as soon as we were in the van she opened her lunch box and ate up the entire lunch. At least I now know that I didn’t need to worry about there not being enough food. 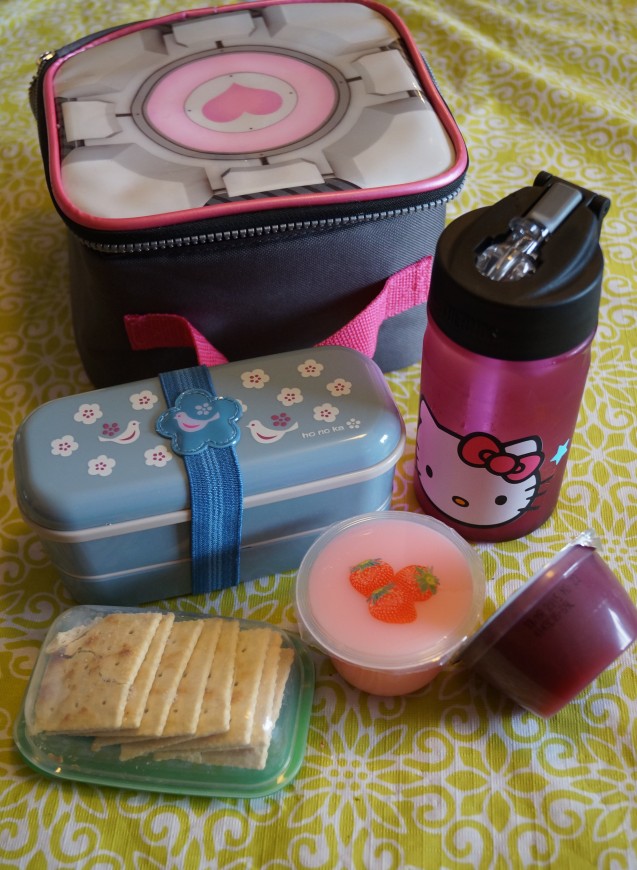